After Christmas Parade Massacre, Is There Blood on the Hands of the Leftist Provocateurs?
Dr. Michael Brown 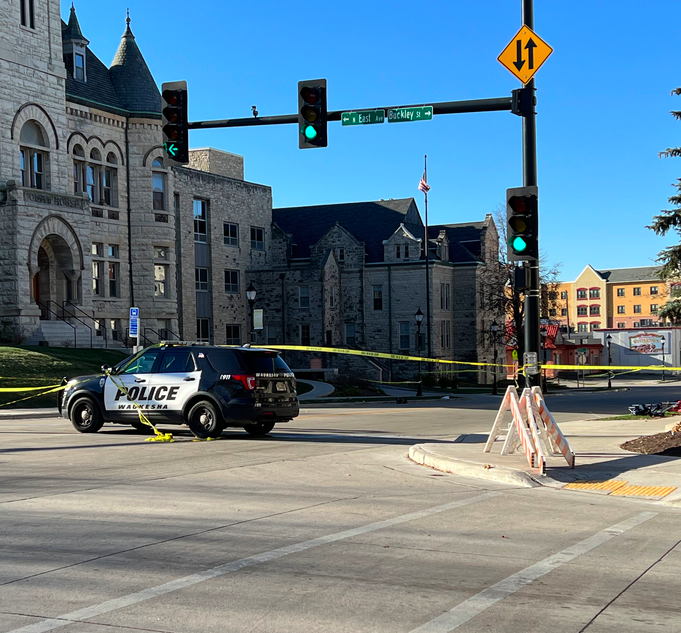 The morning after the Waukesha Parade attack mass casualty event. This file is licensed under the Creative Commons Attribution-Share Alike 4.0 International license.

On April 18, 2019, I warned a Catholic antisemite that his rhetoric could lead to the shedding of Jewish blood, despite his explicit renunciation of violence. Eight days later, on April 27, a 19-year-old gunman, himself a professing Protestant Christian, started shooting Jews during a synagogue service in Poway, California.

Was there a link between the antisemitic rhetoric and this young man’s murderous actions? Only God and the shooter know for sure, although, without a doubt, the shooter alone is responsible for his actions.

In the same way, it is only right to ask if there is any connection between the left’s incessant attacks on Kyle Rittenhouse as a white supremacist and the Christmas parade massacre in Waukesha, WI, just 55 miles from Kenosha.

To be clear, Darrell Brooks, the alleged driver of the SUV who killed 6 and injured more than 60, is alone responsible for his actions. He alone will go to court and potentially spend the rest of his life in prison (or suffer the death penalty).

At the same time, he does not live in a vacuum. And with things as volatile as they are in our society today, it is important to put these questions on the table for discussion and reflection.

We now have information that Brooks hated whites and called for violence against them. And the massacre took place just two days after the Rittenhouse verdict and, as stated, less than 60 miles away. Isn’t it logical to ask if there a connection between the two?

There was actually no evidence connecting the Kenosha shootings with white supremacy, as Rittenhouse was protecting a business owned by brown-skinned men (Indians) and the men he shot were white. Rittenhouse even claims to support BLM.

Yet, from presidential candidate Joe Biden to MSNBC’s Joy Reid, along with a host of other pundits and politicians and commentators and celebrities, Rittenhouse was branded a white supremacist and a racist murderer. In fact, the accusations didn’t let up even after the jury’s not guilty verdict. (For more on this, see here and here.)

On the other hand, there is strong evidence suggesting that the actions of Darrell Brooks were race related, as in this case, a black man who hated whites and who praised Hitler’s killing of the Jews has been accused of the murder or attempted murder of scores of white people, just two days after the Rittenhouse acquittal and less than 60 miles away.

Yet the same politicians and pundits who shouted “White supremacy!” from the roof tops in the Rittenhouse case have been silent when it comes to the elephant in the room in the Brooks’ case.

In that light, I feel it is right and appropriate to ask these questions forthrightly, calling for greater accountability and circumspection even if it turns out that the left did not provoke Brooks to his allegedly murderous acts.

Lest you think I’m being one-sided here, as the Capitol was being stormed on January 6, I said on my national, live radio show that I held President Donald Trump responsible for what was happening.

It was not because of specific things he said earlier in the day during his speech (although it was not wise for him to call the large crowd to join him in marching to the Capitol). And I did not believe for a second that he wanted the Capitol to be stormed.

Instead, I was speaking about months and months of his inflammatory, irresponsible rhetoric, all coming to a head on January 6.

That’s why, to whom much is given, much is required, and even if Trump felt 100 percent sure the election was stolen, there was a wise and unwise way to handle things.

When it comes to the present racial crisis in America, I lay the blame for much of it on inflammatory, biased, even racist reporting and commenting.

Really now, just ask yourself what the media would be saying today if Rittenhouse had been found guilty and two days later, in a neighboring town, a known white supremacist had plowed into a Christmas parade, killing or injuring dozens of blacks. Can you even imagine?

Or ask yourself this. How much did you hear about this verdict from October 2018? “A black man has been acquitted of all charges in the shooting death of a white man outside a bar in a case his attorney said stemmed from ‘ugly racism.’”

You’re not familiar with the case? How interesting.

How about this headline? “Black man who claimed self-defense while shooting a gun found not guilty on same day as Rittenhouse verdict.”

What? You didn’t hear about that?

Of course, you know about the conviction of Derek Chauvin in the killing of George Floyd. That one certainly broke with the prevailing narrative.

How about this case, reported by the New York Times November 20, 2021, “A Missouri police detective was found guilty on Friday in the death of a Black man who was fatally shot in 2019 as he sat in a pickup truck outside his home, a remarkable decision given the rarity of convictions in on-duty killings by police officers.”

As for the detective, he was white. And you didn’t hear much about that case either?

Is anyone detecting a pattern here?

It is becoming undeniably clear that the leftwing media (along with other leftist commentators) will push an anti-white, race-baiting narrative, even in the absence of evidence, while ignoring contrary narratives which point in a very different direction.

Now, a jury consisting of 11 whites and 1 black has found the three men involved in the killing of Ahmaud Arberry guilty of murder. But that, we are now told, proves very little either.

As expressed by Zach Stafford on the MSNBC website, “There were many people in my life (not to mention many on the internet) who held on to the hope that maybe Rittenhouse’s trial would be different because the two men he killed were white. But that hope could only exist for those who forgot that anti-Blackness in this country runs deep, so deep that white people who kill white people who are protesting for Black lives aren’t punished the same.” (To buttress his point, he points to the murder of blacks in the 1960s where the murderers were never brought to justice.)

And so, the spin goes on, sickeningly so, further provoking hatred and division and mistrust.

The fact is that racism still does exist in America (not so much systemically, but in many different ways and in many individual hearts). And it appears that, had the Arberry video not been released publicly, justice may never have been served. That is a very serious issue indeed.

Unfortunately, the leftist race baiters obscure the real issues that should demand our attention. And perhaps, worse still, the left’s irresponsible commenting and reporting could provoke unstable people to commit horrific acts of violence. Perhaps – just perhaps – this was the case in Waukesha.

Proverbs 18:21 says, “Death and life are in the power of the tongue, and those who love it will eat its fruits.”

Would that every politician, pundit, celebrity, and commentator, would commit that verse to memory and take it to heart.