As Trump goes down, are we seeing a crisis of prophetic integrity?
Kevin Simington 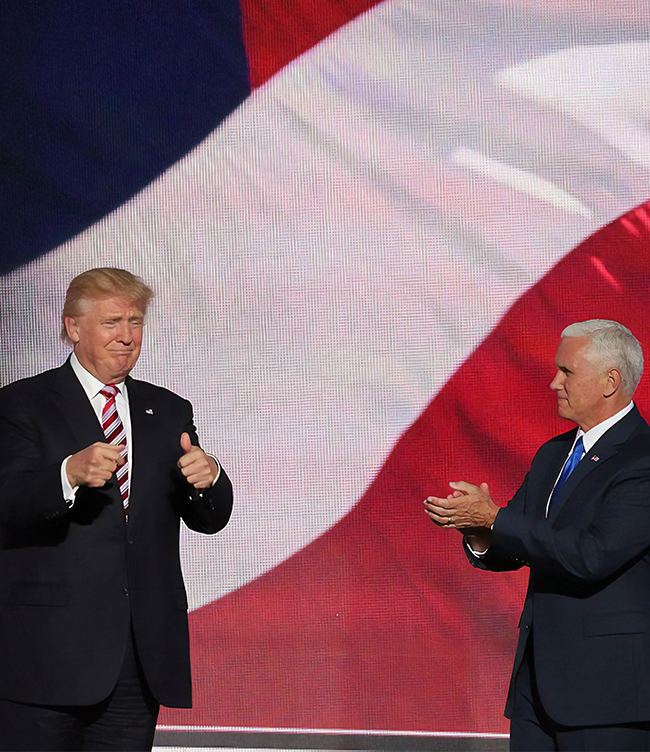 A cascading series of false prophecies by many high-profile Pentecostals over the last year must surely cause us to question the integrity of these self-proclaimed ‘prophets’. It also raises the important question of the nature of prophecy itself.

Now that Joe Biden has been officially declared to be the President-elect, surely we must deal with the many false prophets who authoritatively declared that God had told them Trump would be re-elected and would serve another 4 years in office. These false prophets include Kenneth Copeland, Kat Kerr, Pastor Kent Christmas, Pastor Mike Thompson, Jeremiah Johnson, Pastor Kris Vallotton, and Christian rap artist, Marcus Rogers. All of them claimed to have heard from God. All of them claimed to be speaking on God’s behalf, authoritatively prophesying a second term for Trump.

It was fascinating to see the aforementioned ‘prophets’ moving the goal posts when the election was officially declared in favour of Biden. Many of them doubled down on their prophecies, saying that God was now promising that Trump’s impending legal actions would overturn the result, and that Trump would be installed as President. Now, a couple of months later, Biden has been officially declared as President-elect and some of these prophets are doubling down again (tripling down?), saying that God is promising that he will still miraculously intervene to eventually oust Biden and install Trump for a second term.

For example, one such prophet is now saying that God has revealed to him that an event will take place in March, resulting in Biden’s removal and Trump’s installation as the new President. The followers of these prophets are being urged to maintain their faith and watch for God’s miraculous intervention. The goal posts have been moved yet again!

How many more times will the goal posts be moved? At what point will those who have made these prophecies admit that they were wrong? Another year? Two years? By then, will anyone really remember their false prophecies, or even care? Sadly, I suspect that their false prophecies will probably have faded into obscurity by then, to be replaced by other, more recent prophetic declarations, with very little accountability for their past errors.

This is certainly what happened earlier in 2019. During the first couple of months of the year, many of these same high-profile Pentecostals also declared that God had revealed to them that COVID-19 would be wiped out from the Earth by April. Kenneth Copeland was one of these. In a video sermon, he “breathed out the spirit of God” onto COVID-19, supposedly cursing it and defeating it in the Spirit and declaring that it would be completely gone by Easter. That didn’t happen, but there has been no real washup for these false prophecies. The false prophets simply moved on to their next dodgy pronouncements.

“I would like to repent for inaccurately prophesying that Donald Trump would win a second term as the President of the United States. I refuse to blame the saints and say, ‘It didn’t come to pass because they did not pray enough.’ Nor will I proclaim, ‘Donald Trump actually won, so I was right, but now it has been stolen from him.’ I was wrong, I am deeply sorry, and I ask for your forgiveness.”

I commend him for his contrition. He is effectively admitting that he DIDN’T hear from God on the matter.

Let’s be really clear about this. The prophecies about Trump’s re-election and COVID-19’s extinction were either right or they were wrong. Either these so-called prophets heard from God or they didn’t. There is no middle position where they half-heard from God but misunderstood it. Dr Michael Brown, a prominent voice within the charismatic movement, expressed this view in a recent magazine where he called for accountability for these false prophets: He wrote, “There is no middle ground. There is no third option. There is no reality in which Trump actually did win but in fact didn’t win. Or in which he’s the president in God’s sight but not in man’s sight. To entertain possibilities like this is to mock the integrity of prophecy and to make us charismatics look like total fools.”

He’s right. But sadly, I am now seeing many Pentecostals and charismatics scurrying to propose such a third option. Some are saying that the pre-election prophecies expressed God’s desire but were contingent upon the faithful prayers of his people. (Thus, according to this new interpretation, it is God’s people who are to blame for the unfulfilled prophecies because of their lack of prayer and lack of faith). Others are saying that the prophecies declared God’s will, but the election was stolen from Trump because of fraud. (But what does this say about God’s ability to bring about his will on Earth?) Still others are suggesting that Trump is, indeed, the newly elected President but not in the eyes of the world, and possibly never will be. And on and on it will go: this stubborn refusal to face the fact that many church leaders uttered demonstrably false prophecies.

Furthermore, these creative new interpretations of the prophecies fail to account for the definitive nature of some of the pre-election prophetic statements, such as one which declared, very specifically, “I guarantee it. Joe Biden will not serve a single day in the White House! Trump will serve another four years!” There is simply no way of reinterpreting such a clear statement.

This whole episode raises a more fundamental question: What is the nature of prophecy? True biblical prophecy was when God spoke clearly to a person and that person relayed God’s message to God’s people. But in the modern Pentecostal Church, the concept of prophecy seems to have been watered down to a kind of spiritualised imagining. You don’t have to have clearly heard from God; just dream something up in the Spirit and speak it out!

In fact, this is precisely how I heard a Pentecostal preacher define prophecy in a sermon many years ago. I was attending a Pentecostal service in Coffs Harbour in 1992 when the preacher defined prophecy in exactly this way, declaring that every Christian could prophesy if they wanted to. He then asked, “Who would like to give it a try right now?” A 10-year-old boy put his hand up and the Pastor invited him onto the stage. He then gave the boy the microphone and encouraged him to say the first thing that came into his head. The boy tentatively said, “Umm … maybe someone here has a cold?” The pastor then asked the congregation if anyone had a cold, and two people put their hands up. The pastor then said to the little boy, “You see? You just prophesied! Hallelujah!” The congregation then all applauded, and several more people came up to the stage to “have a go”.

What an absolute farce! It makes a mockery of prophecy. It dilutes it to spiritualised imagination and guesswork. Yet this appears to be the concept of prophecy that many Pentecostal Christian leaders seem to have. They authoritatively declare, “God has revealed to me …” when, in reality, they are simply pronouncing their own self-deluded imaginings. I am probably being generous in using the term, ‘self-deluded’. It may be that some of these people honestly think they have heard from God, and are simply self-deluded, but I suspect that many of these self-proclaimed prophets know, deep down, that they have NOT actually heard the authoritative, clear voice of God on a matter.

They are not even fooling themselves. They know their pronouncements have been concocted by their own imaginations, but they deliberately and falsely attribute their declarations to the voice and will of God.

Jeremiah 14:14 states “The prophets are prophesying lies in my name. I have not sent them or appointed them or spoken to them. They are prophesying to you false visions, divinations, idolatries and the delusions of their own minds.”

For decades, the Pentecostal Church has been blithely accepting this diluted view of prophecy,  and when a leader’s prophecy has failed to be fulfilled, their followers have simply adopted the attitude, “Oh well, he got it wrong that time. No one’s perfect.” It is a very low view of prophecy. It is the concept that prophecy is merely our fallible attempts to discern the mind of God on a particular matter, and that sometimes we get it wrong. But that is not prophecy as defined by the Bible:

“No prophecy came about by the prophet’s own interpretation of things. For prophecy never has its origin in the human will, but prophets … spoke from God as they were carried along by the Holy Spirit.” (2 Peter 1:20-21)

True prophecy doesn’t originate in the mind or imagination of the prophet. True prophecy is when someone hears clearly and unequivocally from God and speaks authoritatively on his behalf. There is no guesswork involved.

God’s attitude toward those who falsely claim to speak for him leaves no doubt as to the seriousness of their deception. In the Old Testament, God declared that false prophets should be cut off from the people of God and put to death (not that I am suggesting such a course of action now!).

Deuteronomy 18:20 “A prophet who presumes to speak in my name anything I have not commanded is to be put to death.”

Ezekial 13:9 “My hand will be against the prophets who see false visions and utter lying divinations. They will not belong to the council of my people or be listed in the records of Israel, nor will they enter the land of Israel. Then you will know that I am the Sovereign LORD.”

Isn’t it time that Christians held these self-proclaimed ‘prophets’ to account? Either they were right or they weren’t. If their predictions were wrong, then let’s be honest enough to acknowledge what has happened. They were false prophecies, and those who uttered them are false prophets. There is no third option.

The Bible exhorts us to “test the prophets”, but, sadly, I don’t see a whole lot of testing going on at the moment.

“Dear friends, do not believe every spirit, but test the spirits to see whether they are from God, because many false prophets have gone out into the world.” (1 John 4:1)