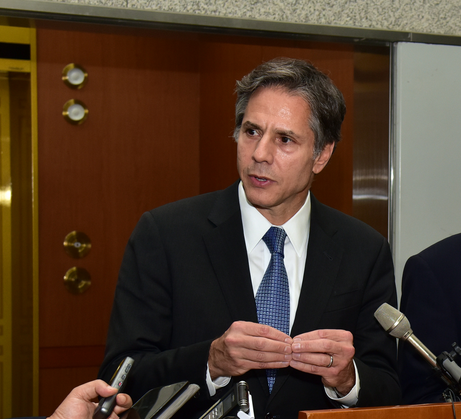 The Biden administration is under fire after it removed Nigeria from the list of countries that severely violate religious freedom.

The U.S. removed Nigeria from its list of religious violators, even as it blacklisted Russia, China, and eight other countries “as countries of particular concern for having engaged in or tolerated systematic, ongoing, and egregious violations of religious freedom”.

The change was made the day before Secretary of State Antony Blinken arrived in the country from his just completed African tour. While Nigeria was removed from the list, Russia was added.

According to the State department, under the International Religious Freedom Act (IRFA) of 1998, the President is required to annually review the status of religious freedom in every country in the world and designate each country the government of which has engaged in or tolerated “particularly severe violations of religious freedom” as a Country of Particular Concern (CPC).

The law defines particularly severe violations as “systematic, ongoing, egregious violations of religious freedom,” including violations such as: (1) torture; (2) prolonged detention without charges; (3) forced disappearance; or (4) other flagrant denial of life, liberty, or security of persons.

The most recent Countries of Particular Concern designations were made by the Secretary of State on November 15, 2021. They are: Burma, People’s Republic of China, Eritrea, Iran, the Democratic People’s Republic of Korea, Pakistan, Russia, Saudi Arabia, Tajikistan, and Turkmenistan.

The most recent Special Watch List designations were made by the Secretary of State on November 15, 2021: Algeria, Comoros, Cuba, and Nicaragua.

The most recent Entities of Particular Concern designations were made by the Secretary of State on November 15, 2021: Al-Shabaab, Boko Haram, Hayat Tahrir al-Sham, the Houthis, ISIS, ISIS-Greater Sahara, ISIS-West Africa, Jamaat Nasr al-Islam wal Muslimin, and the Taliban.*

*The Taliban’s designation is based on information analyzed as of August 15, 2021.

In a November 17 statement, Blinken said: “The United States will not waver in its commitment to advocate for freedom of religion or belief for all and in every country. In far too many places around the world, we continue to see governments harass, arrest, threaten, jail, and kill individuals simply for seeking to live their lives in accordance with their beliefs. This Administration is committed to supporting every individual’s right to freedom of religion or belief, including by confronting and combating violators and abusers of this human right.

“We will continue to press all governments to remedy shortcomings in their laws and practices, and to promote accountability for those responsible for abuses. The United States remains committed to working with governments, civil society organizations, and members of religious communities to advance religious freedom around the world and address the plight of individuals and communities facing abuse, harassment, and discrimination on account of what they believe, or what they do not believe.”

In September, the chair of the Christian Association of Nigeria in the Sumaila Local Government Area of Kano state, Nigeria, died from wounds inflicted on him during a mob attack on his home.

Also in September, at least 49 people were killed and 27 abducted in attacks by armed assailants of Fulani ethnicity on communities in three Local Government Areas of central Nigeria.

Earlier this month, at least 100 Christians were abducted after armed bandits stormed a church service. According to Open Doors UK and Ireland, the gunmen also killed one member of Emmanuel Baptist Church in the attack.

In October, protesters gathered outside the Nigerian High Commission in London to call for action to end the spate of school abductions which have been on the rise in the country since December 2020.