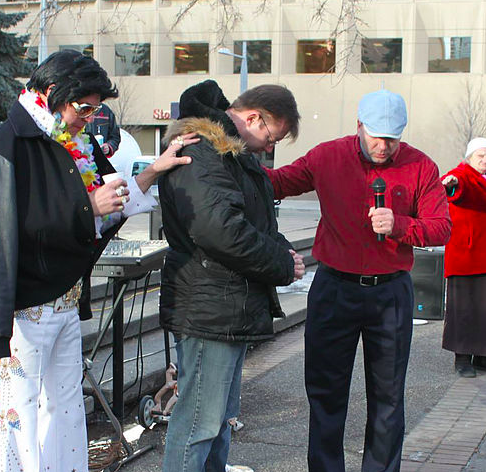 Canadian pastor Artur Pawlowski has been arrested on his return to Canada after a tour to the U.S.

After arriving on the tarmac at Calgary airport after returning from an evangelistic tour in the United States, the pastor, who had two outstanding Canadian warrants, warned American Christians that they are next. He was released later that day.

His warrants are for breaking Covid rules by opening his church during Canadia’s lockdown, as well as an additional warrant for not wearing a face mask.

Arriving home, officers were waiting for him, descending on him as he exited the airplane. He told Fox News, “If they came for me, be sure of it, they’re coming for you as well. What they’re doing today is identical to what I remember growing up (in Poland).

“They wanted to break me. They wanted to show the whole world, ‘You see what we do to those who dare to speak against our tyranny? If you will follow, you’re next.'”

During an Easter service this year, police were called to Pawlowski’s congregation over reports that Pawlowski and his church “were not adhering to the Canadian government’s COVID-19 public health orders.” Pawlowski was accused of holding a church service exceeding capacity limits set by the Alberta government during a surge of COVID-19 variant infections.

He repeatedly referred to the police and a Public Health Inspector as “Nazis” and “Gestapo” and demanded them to leave the congregation. The police left and no tickets were issued. He was later charged for organizing, promoting and attending an illegal in-person gathering that violated public health orders and was arrested by the Calgary Police Service.

On May 8, 2021, Canadian police arrested Pawlowski and his brother Dawid for “organizing an illegal in-person gathering” in Calgary. They were later released from custody days later.