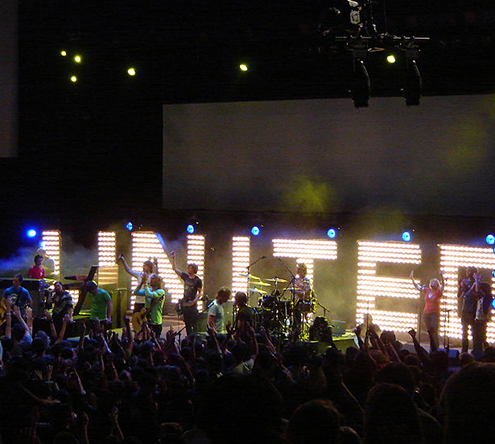 Renowned songwriter Marty Sampson has taken to Instagram to challenge his faith.

Stating that, “All I know is what’s true to me right now, and Christianity just seems to me like another religion at this point,” Sampson is following in the footsteps of Joshua Harris, who also recently announced he was renouncing his faith.

“Time for some real talk…” he stated on Instagram.

“I’m genuinely losing my faith.. and it doesn’t bother me… like, what bothers me now is nothing… I am so happy now, so at peace with the world.. it’s crazy / this is a soapbox moment so here I go xx how many preachers fall? Many. No one talks about it. How many miracles happen. Not many. No one talks about it. Why is the Bible full of contradictions? No one talks about it. How can God be love yet send 4 billion people to a place, all coz they don’t believe? No one talks about it. Christians can be the most judgemental people on the planet – they can also be some of the most beautiful and loving people… but it’s not for me. I am not in any more. I want genuine truth. Not the “I just believe it” kind of truth. Science keeps piercing the truth of every religion. Lots of things help people change their lives, not just one version of God. Got so much more to say, but for me, I keeping it real. Unfollow if you want, I’ve never been about living my life for others. All I know is what’s true to me right now, and Christianity just seems to me like another religion at this point… I could go on, but I won’t. Love and forgive absolutely. Be kind absolutely. Be generous and do good to others absolutely. Some things are good no matter what you believe. Let the rain fall, the sun will come up tomorrow.”

The Australian singer-songwriter has been a major part of Hillsong’s music from the late 1990s. He has featured on the Youth Alive albums and was one of the original Hillsong United band’s worship leaders.

“I’m not sure the wrath of God as you describe it is just. Even if it is just, why doesn’t God forgive as He exhorts humanity to? Surely He is greater than us, and therefore capable of greater love and forgiveness than we are? Why would He not institute an appeals process or some limit of punishment rather than eternal punishment with no recourse. It seems that even human punishment for the most heinous human crimes are not endless. As the Scriptures say, when we sin or do good works, how does that affect God? I’m not convinced that the Adam and Eve story is literally true to begin with, to create the original sin narrative as literally true. Your explanation of the Old Testament Jews not believing in a triune God makes me seriously doubt in the authenticity of the trinity, perhaps you can shed a greater light on your beliefs around divine punishment to help many understand why God is just in condemning individuals in perpetuity, beyond the argument that “God is God and can do whatever He wants?” Surely there is some greater sense of God’s forgiveness as it is progressively being applied to humanity through the ages?”

Sampson’s main instrument is the guitar although he also plays the piano, flute and drums. Aside from work for Youth Alive and Hillsong United, Sampson has issued solo albums.

His last album with Hillsong United was the 2011’s Aftermath.