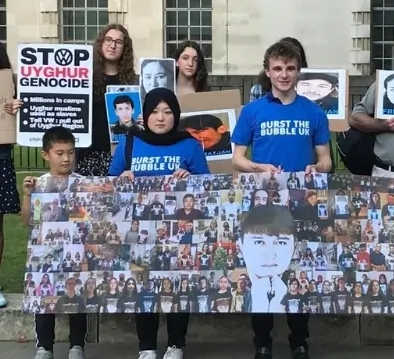 Jonathan Gibson (blue T-shirt) leader of Burst The Bubble UK, next to Dilnaz Kerim (on his left) holding a poster of the “Free Ekpar” campaign. Ekpar’s sister, US-based Rayhan Asat, has run a high-profile five-year campaign for his release since he vanished in 2016. But they are still no nearer uncovering the mystery of his disappearance. Image: Bitter Winter

Dilnaz Kerim and her family have had enough of lies and stalling. They are begging the British government to take the disappearance of their loved ones seriously and meet with her to discuss a way forward.

Dilnaz Kerim had just one request, “Find My Family.” And now, nobody can stop her.

Gathering outside Downing Street in London last week the Uyghur teenager and her supporters called on UK Foreign Secretary Dominic Raab to meet with her and help find her family. The 18-year-old’s “Find My Family” movement is gaining momentum with the added backing of the teenage advocacy movement “Burst The Bubble UK,” whose leader Jonathan Gibson pleaded with the closed doors of Number 10 to listen and face up to the Chinese government over the disappearance of Dilnaz’s family and hundreds and thousands of others who have vanished.

“We will not rest until we have found Dilnaz’s family,” he said.

Dilnaz, whose advocacy has reached the ears of the BBC, attracted more than half a million followers on Twitter following her prime-time broadcast last week. Politicians Iain Duncan Smith, Lord David Alton, personality Stephen Fry, NGO leaders and activist groups have all lent their voices to the groundswell of support for the schoolgirl, soon to enter university to study math, but whose carefree teenage years have been marred by trauma and grief over the fate of her relatives in her homeland.

Asked by Adina Campbell on the BBC’s Radio 4 Today program if she felt like “an ordinary 18-year-old,” Dilnaz replied that instead of enjoying new hobbies, exploring new things and “living her best life,” her sleep is peppered with nightmares and her waking hours filled with planning new ways to raise awareness so that her people can be free.

Dilnaz was heartened by the UK parliament vote confirming the crime of genocide against the Turkic people of Northwest China, but she is frustrated by the lack of action against the CCP. Beijing has continued to deny even the existence of her family and continues to this day undeterred in its persecution of her ethnic group.

“My whole family is in Xinjiang,” she said. “These are real people, not simply statistics.” “I don’t know where my aunts, uncles, cousins and grandmother are. The Chinese government refuses to tell me,” she added, asking “where are they? Are they in prison, in concentration camps, in factories, in prison?” Since the shutters came down on communication with the outside world in 2017, social media connections with those living abroad became too dangerous, and many telephone lines were simply cut or became unobtainable. A huge void exists now for the Kerim family filled with questions, uncertainty and fear.

She wanted to put a face and personality to one of the “disappeared,” and described her cousin Imran whose sense of humor and mischief she loved when she visited her homeland as a seven-year-old. “Now he is 18 like me,” she said asking, “what has happened to his hopes and dreams? Maybe he wanted to travel the world. Maybe he wanted to start a business, maybe he wanted to become a philanthropist. Now whatever his hopes were, they have been crushed by the CCP, the same people who told me he doesn’t exist.”

Dilnaz’s father Kerim stands at the edge of the demonstration holding a sign reading, “Where are my relatives?” A forlorn yearning clouds his face. However sincere the teenage demonstrators, and however heartfelt their speeches, they would always be voyeurs. None could plumb the depths of the sorrow experienced by a man, exiled from his loved ones and agonizing over the fate of each one.

Kerim, who has already faced two exiles, has never mastered English, and leaves it up to his daughter to be his spokesperson. Her BBC interview included an account of her father’s own wrongful imprisonment in the ‘90’s when he was tortured at the hands of Beijing. The  scars left after he was hung by his wrists still mark his arms. He imagines similar treatment being meted out to his relatives while he lives in relative comfort in London. The pain tortures him daily.

“I will meet with any MP who would like to discuss this further,” she said. “We have an opportunity to help those innocent people who are persecuted for their ethnicity by the Chinese Communist Party. Together we can raise awareness of this genocide but more importantly do something about it. Please help me find my family,” begged Dilnaz.