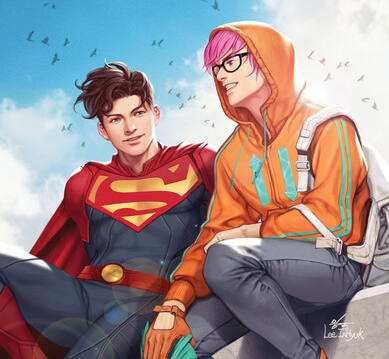 It’s official: political correctness is ruining everything! The son of everyone’s favorite superhero, Superman, has decided it’s time to follow the crowd, coming out as bisexual in a new DC comic. Well, maybe the blame should be placed on the DC writers as opposed to the fictitious characters.

Perhaps he was inspired by another DC character, Robin, who in August, came out as bisexual.

The new Superman will come out as bisexual in the upcoming comic. The new storyline, which features Jon Kent, the son of Clark Kent and Lois Lane, was announced on National Coming Out Day, an annual LGBTQ+ awareness day.

In the comic, Jon Kent, the son of Clark Kent and Lois Lane, has followed in his father’s footsteps and, as well as saving the world, also fallen for a reporter.

“I’ve always said everyone needs heroes and everyone deserves to see themselves in their heroes and I’m very grateful DC and Warner Bros. share this idea,” said writer Tom Taylor in a DC statement. “Superman’s symbol has always stood for hope, for truth and for justice. Today, that symbol represents something more. Today, more people can see themselves in the most powerful superhero in comics.”

Just like his father before him, Jon Kent has fallen for a reporter. After initially striking up a friendship with reporter Jay Nakamura, he and Jon become romantically involved in the pages of SUPERMAN: SON OF KAL-EL #5 from writer Tom Taylor (DARK KNIGHTS OF STEEL) and artist John Timms (HARLEY QUINN).

Following a scene where Superman mentally and physically burns out from trying to save everyone that he can, Jay is there to care for the Man of Steel.

“We couldn’t be prouder to tell this important story from Tom Taylor and John Timms,” said DC Chief Creative Officer and Publisher Jim Lee. “We talk a lot about the power of the DC Multiverse in our storytelling and this is another incredible example. We can have Jon Kent exploring his identity in the comics as well as Jon Kent learning the secrets of his family on TV on Superman & Lois. They coexist in their own worlds and times, and our fans get to enjoy both simultaneously.”

Even the most diehard Superman fans didn’t share their enthusiasm of what is becoming a boring theme.

As one person commented, “Why do they always twist the established characters? Why can’t they make new cool characters that have appeal to the desired demographics?”

“What a fool I was back in the 90’s thinking all gay people wanted was to simply live their lives in peace … I’m sorry America … I’m sorry for not seeing this agenda!”

In June, Disney Marvel broke new ground in introducing its first gender-fluid character. In Marvel Studios’ “Loki,” the mercurial villain Loki (Tom Hiddleston) resumes his role as the God of Mischief in a new series that takes place after the events of “Avengers: Endgame.”