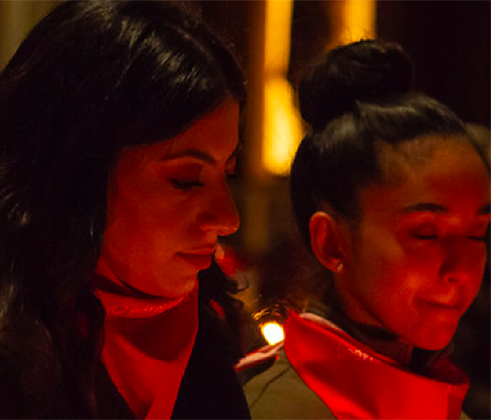 Christians wear red to remember persecuted Christians around the world.

Christians are being refused COVID-19 aid in countries across Asia, Middle East and Africa, according to the World Watch List 2021 report released today.

The annual report, released today by global charity Open Doors, shows COVID-19 has intensified the persecution and discrimination of at least 340 million Christians around the world. The World Watch List 2021 highlights that COVID-19 has been a catalyst for discrimination against Christians, including the denial of emergency relief where some were told “Your church or your God should feed you” and that the virus was created and spread by the West.

The World Watch List is a global research tool, in its 29th year in 2021. It was initially conceived as a tool to guide Open Doors fieldwork, now carried out in over 70 countries worldwide.

Released at the beginning of each year, the list uses extensive research and surveys, data from Open Doors field workers and external experts to quantify and analyze persecution worldwide. It is certified by the International Institute for Religious Freedom. The Institute carries out an annual audit of the list’s methodology and releases a corresponding audit statement. It is the most authoritative list of its kind.

KEY FINDINGS:
North Korea was ranked as the most dangerous country for Christians for the 20th year in a row
Human trafficking becomes worse for Christian women during COVID-19.
COVID-19 facilitates increased surveillance and controls by authoritarian governments.
One in eight Christians worldwide are persecuted for their faith

In India, 80% of those receiving emergency relief from Open Doors’ partners were first excluded from official distribution. The violent Islamic extremist group, Al Shabaab, in Somalia blamed Christians for COVID-19, announcing it was spread by the crusader forces who have invaded the country and the disbelieving countries that support them.

Open Doors Australia and New Zealand CEO, Mike Gore says, “This is a sad but true reality of persecution and discrimination around the world. The persecutors use whatever tools possible to inflict the most harm and the greatest consequence on Christians who choose to follow Jesus. It is a terrifying thought that another human would use the fear of COVID-19 as a tool of conformity when it comes to one’s faith choice.”

Gore continues, “This is an alarming trend and one that Western Churches and Governments need to be mindful of and proactively address. Religious freedom is coming at a greater cost each year and now more than ever before we need to use our voice to advocate for Persecuted Christians.”

The report also uncovered the deliberate targeting of Christians for human trafficking, especially that of women and girls for the sex trade. It has raised significant concern by gender-specific religious persecution experts.

90% of experts surveyed by the Religious Liberty Partnership agree that COVID-19 has caused an increased trafficking of women significantly or moderately. There was an increase in vulnerability to domestic violence during lockdown, particularly Christian converts and women. Reports of kidnapping, forced conversions and forced marriage of women and girls increased.

The study identified the impact of increasing saturation of technology into daily life meaning that in many places, governments can watch their citizens more closely than ever before. Surveillance cameras, facial recognition software and biometric-based systems have been used to monitor and target Christians in several countries.

Mike Gore concludes his thoughts on this year’s World Watch List: “The World Watch List is important because in many ways it paints a roadmap of successful Christianity, a tool that should inspire, encourage and compel the Western Church to act, to stand up and stand with their fellow Christians the world over who pay a high price for the freedoms we too often take for granted.”

The 2020 list saw North Korea take top spot as the country where the highest number of Christians are persecuted. To download the full 2021 World Watch List Report, go to opendoors.org.au/report.