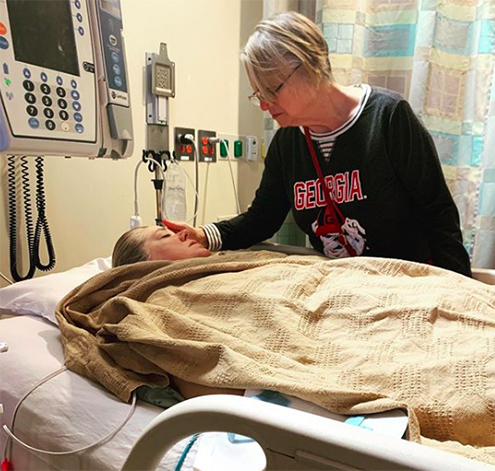 Third Day’s lead singer has taken to social media to thank Christians worldwide for praying for his wife after she suffered a brain aneurysm.

Mac Powell used social media after Thanksgiving to ask for prayers after his wife, Aimee, as she is in hospital.

Aimee Powell was admitted to hospital over the Thanksgiving weekend after the singer called the ambulance. After complaining of a serious headache, her husband called an ambulance.

Earlier this year, Hillsong worship leader Chelsea Taylor, who is based in Australia, was rushed to hospital with a brain aneurysm. She miraculously recovered after Christians united in prayer.

Mac took to Instagram to update family and friends, stating, “Aimee is in a lot of pain in her head. They have given her meds for it but nothing will completely help. They say the pain is going to be there. Eventually as the blood from the rupture leaves her brain it will work it’s way down to the neck and then her back. She’s getting a lot of rest- unfortunately, it’s usually only about 10 minutes of uninterrupted time with all the doctor and nurse visits and the alarms and beeps from the monitors.

“She hasn’t eaten in probably 36 hrs or so. Pray that her appetite starts to return so that she’ll get the strength to start moving a little bit.

“All signs are good so far. There doesn’t seem to be any negative neurological signs yet for physical or mental deficiencies. Thanks for your love and prayers!”

He has started the hashtag #prayforaimee. Earlier this year, Third day announced that it is calling it quits after more than 25 years together.