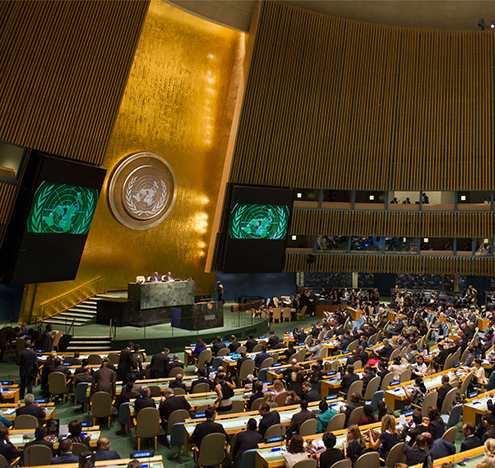 When we see acts of atrocity in countries like Nigeria and China and lives lost and people imprisoned, the UN’s day brings awareness to the world’s persecuted.

“Today is a United Nations milestone: it is the International Day Commemorating the Victims of Acts of Violence Based on Religion or Belief,” commented Catholic League president Bill Donohue. “A resolution marking this day was unanimously passed in May; it was introduced by Poland, no stranger to religious persecution.

“On May 28, Poland’s foreign minister, Jacek Czaputowicz, addressed the General Assembly about this historic event. “The world has been experiencing an unprecedented rise of violence against religious communities and people belonging to religious minorities.” He went on to say that “Any act of violence against people belonging to religious minorities cannot be accepted.”

“When Aid to the Church in Need released its 2018 “Religion Freedom Report,” it noted that 61 percent of the world’s population live in nations where religious freedom is obstructed or completely denied. It estimated that 327 million Christians live in nations where they are persecuted for their faith.

“In 2019, Open Doors released its report on religious persecution. It put the number of Christians being persecuted at over 245 million. In the period November 1, 2017-October 31, 2018, it found that 4,305 Christians were killed because of their faith.

This event bears similarity to the International Day for the Elimination of Violence Against Women, which also brings awareness of the prevalence of religious persecution and the violence faced by minorities.

“Christians need to speak up more about the violence, church burnings, vandalism, and the like,” Donohue commented. “In Europe, Christians in France are the most targeted. There were 875 attacks on Christian sites in 2018, and acts of theft and vandalism at Christian sites are peaking.

“It was distressing to read what Georges Pontier, the head of the French Bishops Conference had to say about these attacks. “We do not want to develop a discourse of persecution. We do not wish to complain.” The bishop is mistaken. The discourse of persecution has already begun, so he either participates in it or not. History shows that there is no virtue in confronting persecution with silence; it only ensures more of it.

“Acting more responsibly is President Trump. On July 17, he met with 27 victims of religious persecution from around the world, pledging his support for religious freedom. He was commended by Freedom House for doing so.

“No one believes that religious persecution will end any time soon, but it is important for the United Nations to set aside a day to draw attention to this very serious problem. We hope it will now put some teeth into this resolution.”