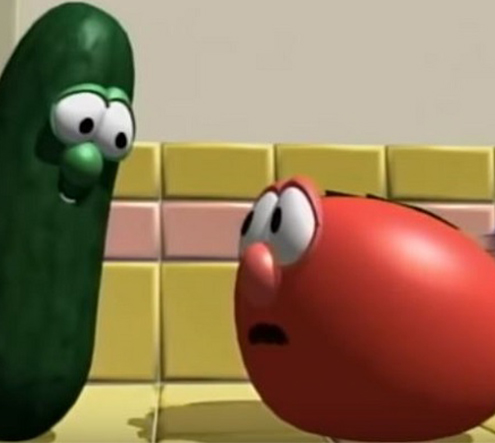 The founder of Veggie Tales has spoken about LGBT issues and the imminent affect it will have on Christian children’s programme creation.

In an interview with The Christian Post, Phil Visher has opened up about the fact that LGBT will be a subject that writers and creators will not be able to ignore.

Visher, who founded the enormously successful Veggie Tales programmes, told The Christian Post, “Parents are definitely going to have to deal with a growing LGBT presence in children’s media.

The popular children’s cartoons, books and merchandise brand is now owned by DreamWorks, part of the gigantic Comcast company. From 1993 to 2004, VeggieTales videos were produced in Chicago, Illinois. After Big Idea Production fell into bankruptcy in 2003, VeggieTales was purchased by Classic Media in 2004 and production moved to Nashville, Tennessee.

Each Veggie Tales episode teaches a moral life lesson through a biblical world view. The lessons include dealing with peer pressure, handling bullies, forgiving others, fighting temptation, handling fear, listening to parents, having self-esteem and being compassionate. It was created by Phil Vischer and Mike Nawrocki, who both perform many of the characters’ voices.

“I think it (LGBT) will have to be addressed at some point; I do think it’s a matter of time,” he continued. “It’s tricky because it’s so divisive.

“I think it would be difficult for a couple of reasons. First: the nuance of how to treat LGBT issues isn’t agreed upon within the Church; and secondly, some parents may want to have that talk with their kids.”